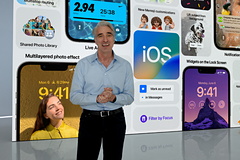 Apple introduced a new generation of MacBook Air with an ARM M2 processor as part of a presentation at WWDC 2022. The broadcast of the event is available on YouTube.

The laptop received a new design in the style of the MacBook Pro with straight edges and a cutout for the front camera in the screen. The MacBook Air has a 13.6-inch display with up to 500 nits of brightness and a MagSafe charging port with two USB-C ports. It is 20 percent faster than the previous generation, and compared to the generation on Intel processors, performance has increased five times. On a single charge, the laptop runs for 18 hours.

The laptop comes with a new power supply with an additional USB-C connector for connecting accessories.

The M2 chip is based on a five-nanometer process technology and has 20 billion transistors. The chip supports 24 gigabytes of unified memory (combined block of memory for the processor and graphics core). The chip has an eight-core processor and a ten-core video core. In performance tests, it is 18 percent faster, the graphics are 35 percent faster. The chip will also be installed in a 13-inch MacBook Pro.

At the end of March, it became known that Apple refused to sell the new iPhone SE, Mac Studio and the updated iPad Air in Russia. Earlier in the month, the company stopped sales of goods in Russia and stopped exporting its equipment.