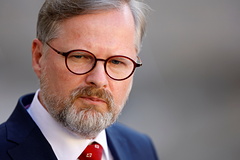 Czech President Milos Zeman and the government of the republic fully support the entry of Sweden and Finland into NATO. This was stated by Prime Minister Petr Fiala, RIA Novosti reports.

According to Fiala, Zeman instructed him, as the head of the Czech delegation, to convey Prague’s consent to the entry of the two Scandinavian countries into the alliance to the rest of the participants in the NATO summit, which will begin in Madrid on Tuesday, June 28.

The issue of membership of Finland and Sweden in NATO was raised again after the start of Russia’s special operation in Ukraine. Only one member of the alliance spoke out against it – Turkey, whose authorities accused Helsinki and Stockholm of supporting terrorists (we are talking about Kurdish formations). Ankara also put forward a number of requirements, without which it will not allow countries to join the alliance.