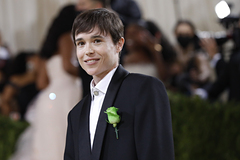 Fans of Elliot Page suggested the actor for the role of the superhero Flash in the new projects of Marvel Studios. It is reported by Screen Rant.

The artist’s fans believe that he can play this role instead of Ezra Miller, who has recently been at the center of several scandals at once. In social networks, they supported Page’s candidacy and recalled that he had already appeared in superhero projects, including X-Men and the Umbrella Academy series.

Earlier it became known that Ezra Miller was banned from approaching a 12-year-old teenager due to inappropriate behavior. The boy’s mother said that the 29-year-old actor was in close contact with her son and invited him to his ranch in Vermont, promising to buy horses for the boy.

In April, the artist was also arrested for assault. He quarreled with a woman and during the scuffle threw a chair at her.

Amid the scandals, Miller was suspended from filming Warner Bros. films. After the scandalous behavior of the artist, who was accused of disorderly conduct and harassment, the Warner Bros film studio, together with DC, suspended work on projects involving Miller. Moreover, during the filming of The Flash (in the summer of 2021), Ezra also behaved inappropriately, experiencing “frequent breakdowns” and not controlling himself, according to sources.