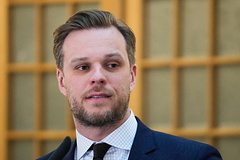 Lithuanian Foreign Minister Gabrielius Landsbergis called on the European Union (EU) not to make concessions to Russia on the issue of transit to Kaliningrad. He is quoted by RIA Novosti.

According to the head of the Foreign Ministry, the hesitation that the West allows, Moscow can perceive as a sign of weakness and its diplomatic victory.

“Russia cannot demand any revision of sanctions and concessions to itself, this must be avoided, as the EC (European Commission – ed.) clearly put it, and I have personally heard that the commission believes so. Russia cannot get a diplomatic victory on the issue of sanctions,” Landsbergis said.

According to him, the EC is still developing a document on how EU sanctions against Russia should be implemented. Reflections on concessions, the minister noted, should not turn into a legal document.

Earlier it became known that the European Commission had prepared a document that would allow Russia to transport sanctioned goods to Kaliningrad through the territory of the European Union. According to Petras Auštrevičius, a member of the European Parliament from Lithuania, “Russia is winning so far” on this issue.

On June 17, Lithuanian Railways notified Kaliningrad Railways of the termination of the transit of a number of goods subject to EU sanctions.