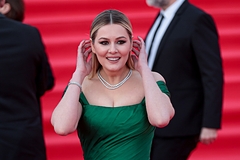 37-year-old Russian actress and public figure Maria Kozhevnikova spoke about the reasons for her departure from the State Duma. It is reported by Komsomolskaya Pravda.

The artist ran for the State Duma in 2011, after which she served as a member of the culture committee until 2016. After leaving politics, Kozhevnikova stopped appearing, and also did not shoot films for several years.

According to the star of the series “Univer”, in the State Duma it was hard for her, as a person who vividly expresses her emotions. At some point, the actress began to have problems with mental health and a deep depression, the treatment of which she is still forced to deal with.

“I would say this: an emotional and warm-hearted person cannot survive there, either you will go crazy, or – live with wolves – howl like a wolf. The first thing happened to me, three years of depression … I just got out, or rather I get out, ”admitted Kozhevnikova.