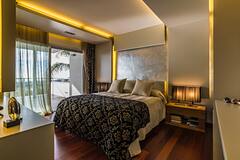 Klosowski said that the fastest way to detect a hidden camera is with a flashlight – just carefully examine suspicious places in the “most private” rooms, such as a bedroom or bathroom.

“You can also turn off all the lights, and if you see an IR signal in the dark (looks like a glowing red dot), you are being watched. Also, you will immediately notice the night vision camera, ”the expert called another way.

The speaker believes that these methods are much more effective than using mobile applications, which often mistake other objects (glass or various surfaces) for cameras. Klosowski also added that the Wi-Fi router could be linked to tracking devices.

“You can just unplug everything that looks suspicious, whether it’s an alarm clock or just a USB connector that seems “extra” in the wall,” the specialist noted.

Earlier in June, tourists were told how to spot fake hotel reviews. So, suspicion should be raised by authors who give excessively positive ratings, as well as hide their name and photo.