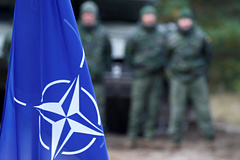 A Bloomberg source reported on NATO’s plans to include links between Moscow and Beijing in the new strategic concept of the alliance.

The document will reveal the alliance’s concerns regarding China in the areas of cybersecurity, disinformation, control of critical infrastructure and international order. The previous version of the concept of the alliance, adopted in 2010, described Russia as a NATO partner, the author of the article recalled.

Earlier, the Polish authorities called on NATO to recognize Russia as an enemy at the summit, which will be held in Madrid on June 28-30. “The NATO summit itself is an element of a certain process, but it should answer the main questions. First of all, unequivocally – and this is what we are waiting for – to define Russia as an enemy, ”said Pavel Solokh, head of the Polish National Security Bureau.

Jens Stoltenberg said that at the moment a broad dialogue between NATO and Russia is impossible. “Our new concept will lead us into an era of strategic competition. It will clearly show that the alliance perceives Russia as the most significant and direct threat to our security,” he said.

Truss urged not to demand peace with Russia from Ukraine