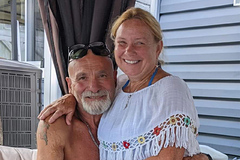 An elderly couple of tourists from the United States decided to sail across the Atlantic on a sailing yacht and disappeared in the middle of the ocean. The New York Post writes about it.

So, 65-year-old Yanni Nikopoulos and Dale Jones from Virginia set sail on June 8 – they planned to overcome about 4.3 thousand kilometers to the Azores (Portugal) on a 10-meter vessel.

At first, travelers regularly called up relatives, but on the fifth day, being 740 kilometers from the US coast, they complained about bad weather, after which they stopped communicating.

The next day, Jones’ daughter contacted the Coast Guard. “We did not see any signs of distress, but we still notified all maritime vessels that are in the area about the loss,” the emergency services said. Now the authorities of Canada, Bermuda and Azores are also involved in the search for an elderly couple.

Earlier in June, a 57-year-old Briton disappeared under strange circumstances while traveling to the Seychelles. The man went for a walk in the jungle along the Grand Barb trail, which runs through the highlands of the islands, and went missing. The search continued for three weeks, after which the authorities of the island state declared him dead.